There's only one way to remove a tree stump....

With apologies to Jasper Carrot and his old '...there's only one way to kill a mole..' comedy routine....

We've five tree stumps on our new piece of land (all conifers) that are quite large and in a difficult spot for removal by digging, and I know from experience it's also back-breaking work exposing the stumps down to a level where the roots can be cut.  Hiring a stump grinder for a weekend also seems a very expensive option.

In anticipation of acquiring the land, we'd cut the trees down to just above ground level around 9 months ago (they'd already been cut to below head-height by someone else in the past) and then we killed them off using Bayer's chemical tree stump killer (glyophosate), which seems to have done the trick since there's been no new growth and the bark on the stumps has already started to soften and can be pulled off easily by hand.

I see that there are proprietary chemical solutions available in the US which claim to rot the stumps in just 4-6 weeks but they don't seem to be available anywhere in Europe, probably because they're not legal to use over here.

Kerosene (domestic heating oil) and the other fuel-based ideas would facilitate the burning of the stump after a suitable period of treatment but there's a risk of contaminating the ground, as there is with bleach and caustic etc.  However, I may try kerosene for a few weeks and then try to burn the stump away.

Anyway, I spent an afternoon drilling a series of holes in the tops of all five stumps into which anything could be poured, and then covered them each with an upturned plastic basin to keep the holes relatively dry until I decided what, if anything, to add to them.


Since at the moment we're in no great hurry to get rid these of stumps, I'd thought I'd try experimenting with a few of the suggestions from the web.

1.  Sugar
We'll begin with sugar since it's cheap, readily available and can't possibly do any harm to anything.  I can also see some sort of logic in the idea, in that it should encourage beetles and grubs etc which may feast on the sugary wood, although the process might take years.

So we simply poured sugar on the middle of the five stumps and rammed it firmly down into all the drilled holes.

This was done on 10 January 2013, and so now we'll just sit back and wait - I'll provide future updates on the progress (or lack of it).

I'll also add to this post when we decide how to treat the other stumps, assuming we don't get tired of waiting and just decide to use mechanical means of removal or simply burn them away ....

Apologies to all readers of this post expecting further weird and wonderful experiments, but we recently had some earthmoving and ground levelling works carried out in the garden.  During a break and a chat with the guy, he asked if we wanted '...those tree stumps pulling out...'  So, with his JCB mini-digger, which was on-site anyway, he dug all five stumps out in less than half an hour, and at no extra cost.....

Posted by where eagles fear to perch at 18:44 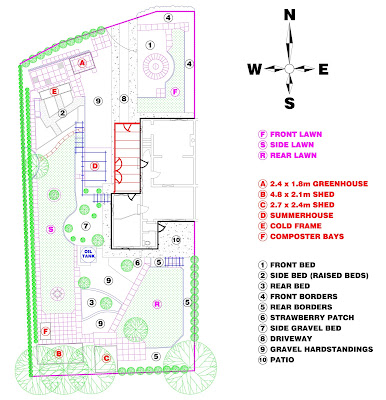